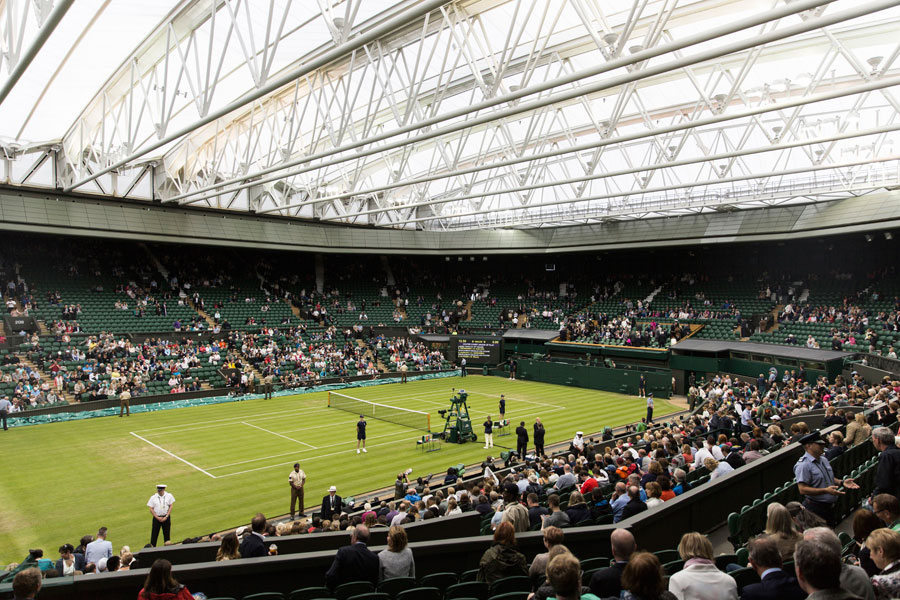 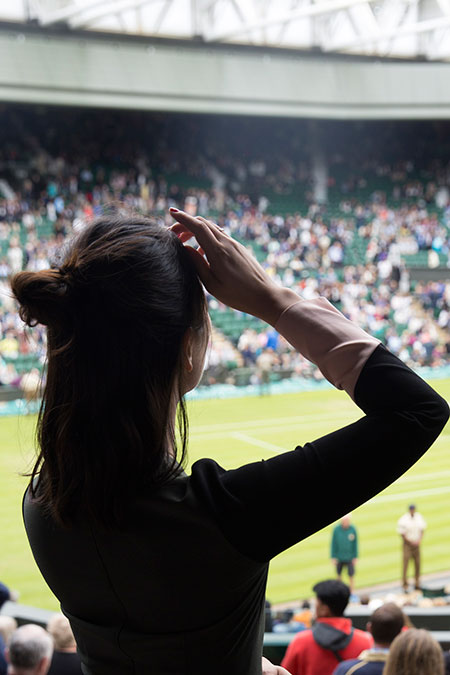 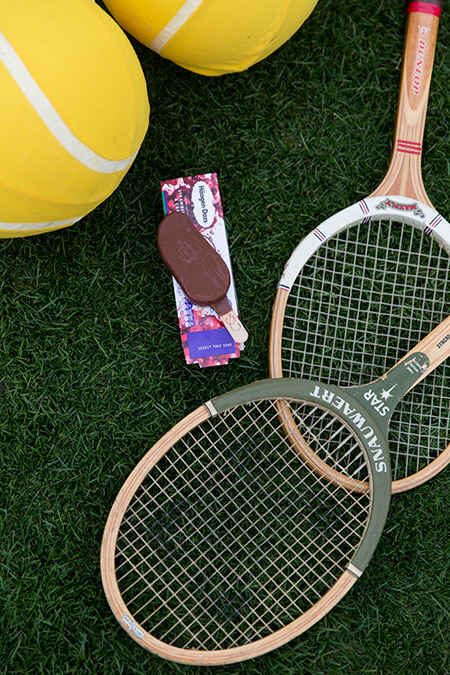 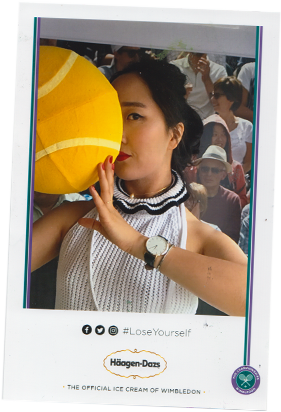 It all starts with this line: ‘You just said [insert dream food] and my eyes went all blurry’. That’s all it takes for the office to collectively groan/sign/wail a little as knees buckle and pens to fall out of melty hand grip. It doesn’t take much, but garlicy pasta, sweet potato fries and ice-cream take the trophy in prompting the most creative noises and about eleven, maybe twelve minutes of temporary vision + hearing loss that does not help with general productivity. The news, therefore, that Häagen Dazs (SIGH) to officially supply ice-cream (AUuhhh) to Wimbledon, and create a limited-edition Strawberries & Cream Stick Bar (YAaaAS) possibly made the neighbours wonder what it is we do in this office, really. 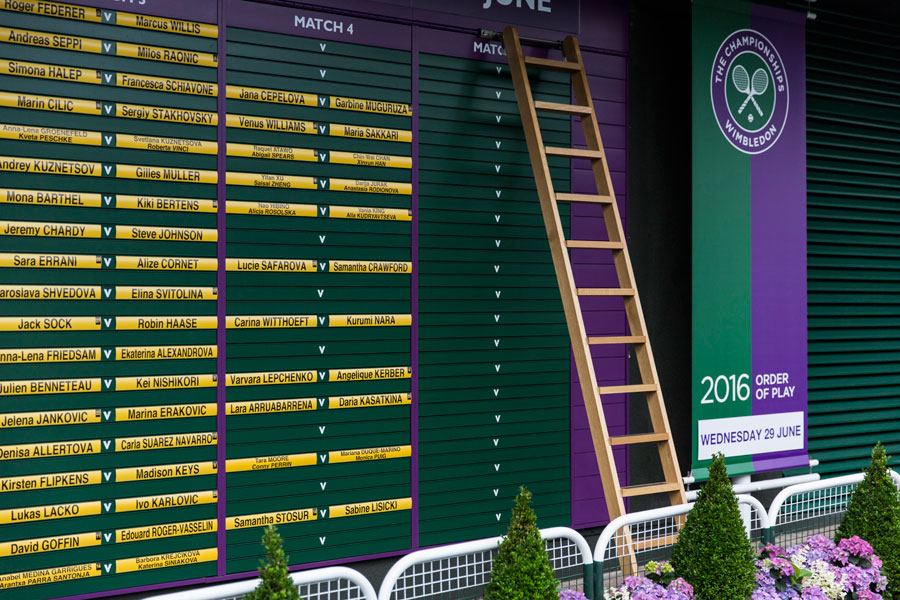 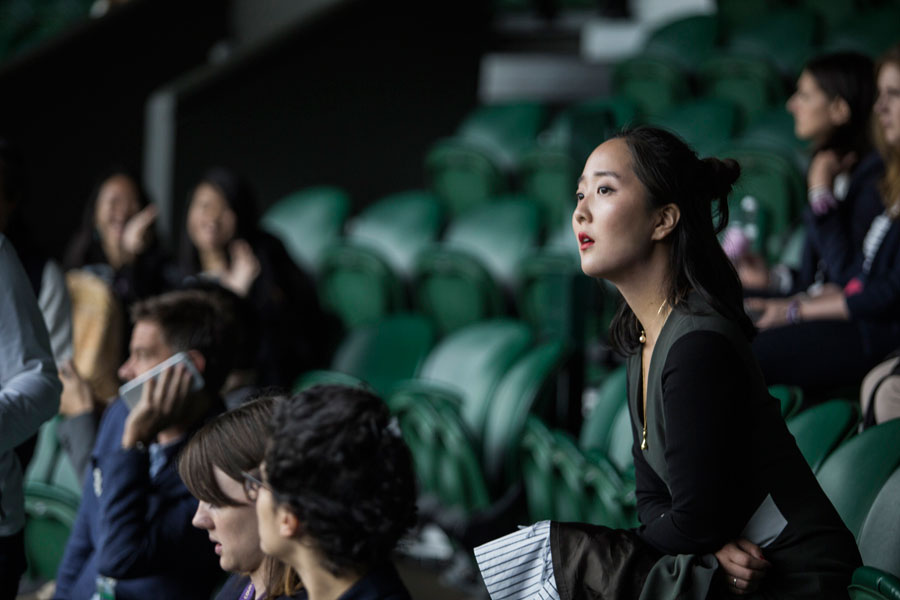 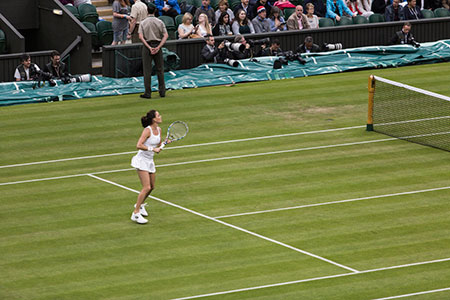 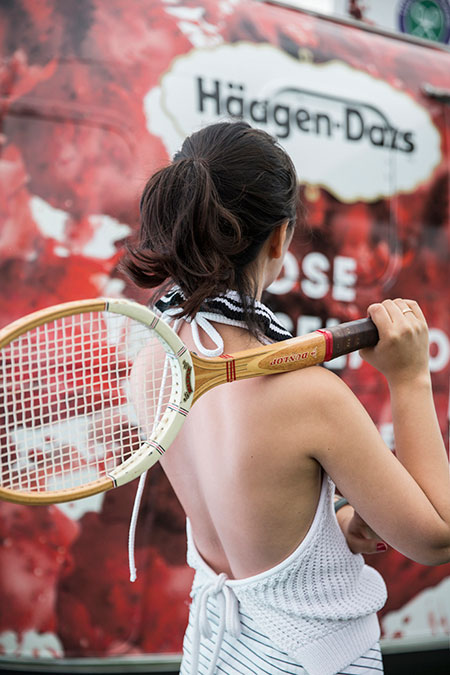 But noise tells everything, doesn’t it? And the lack thereof. Contrary to what I’d expected, Wimbledon is much less about the scores or the off-chance that you’ll spot Andy Murray scoffing down a banana in an information booth, or Federer adjusting his headband at the men’s (both of these need to be a Snapchat filter). The real joy is getting lost in the deafening silence between a forehand hit and a slice, or the split-second of hush before the board updates the scores. It’s the collective, gentle gasp, and a thunder of hoot-less clapping after a match-set that makes Wimbledon so addictive. Every single spectator leans in, decisively tracking the yellow ball as it tours the court with every hit, completely lost in the moment. Add a Häagen Dazs ice-cream* to this equation and you’ll need to lay down from mirth overdose at some point.

*If Wimbledon is not one of your summer plans, the limited-edition Strawberries & Cream Stick Bar is also available exclusively at Selfridges during the Championships fortnight (London Oxford Street, Manchester Trafford Park and Birmingham Bullring) – just make sure to go by the Wimbledon finals weekend. 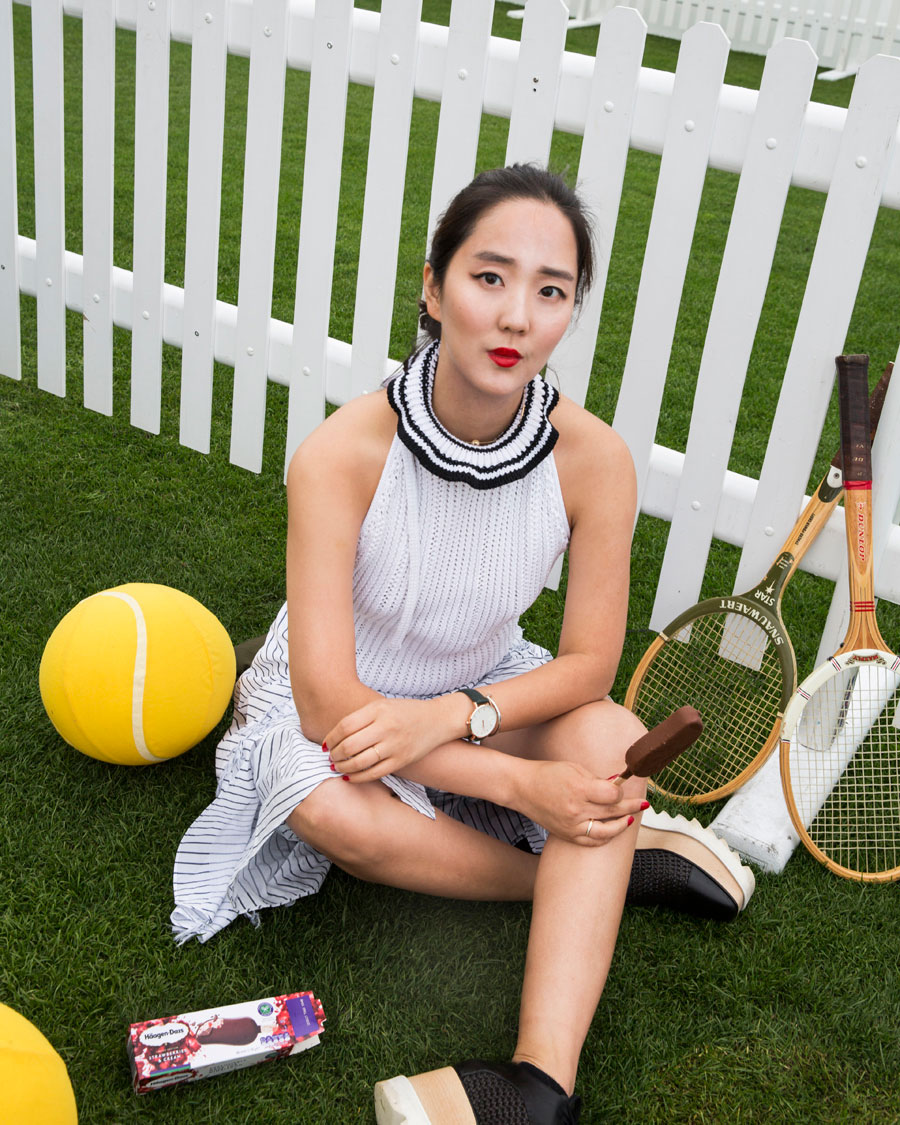 In collaboration with Häagen Dazs 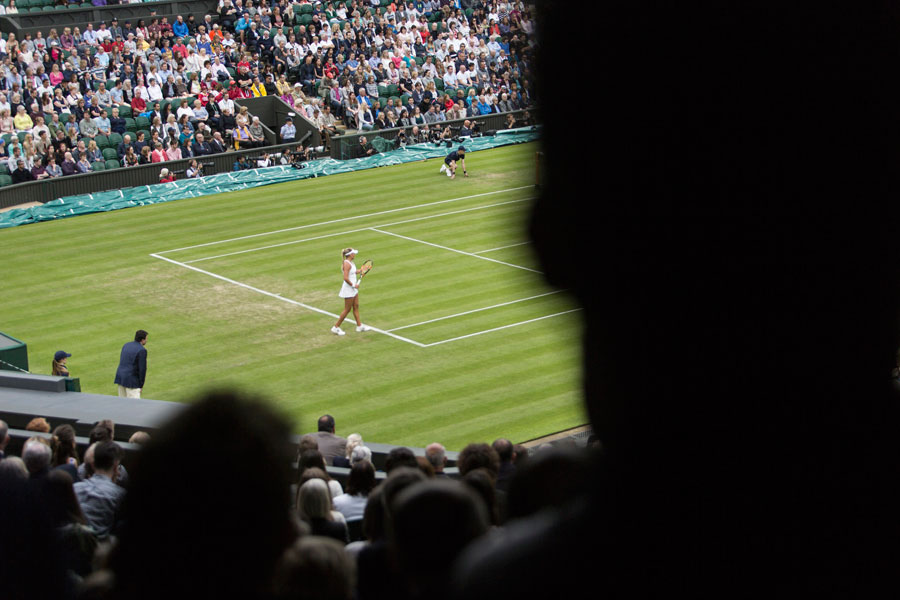 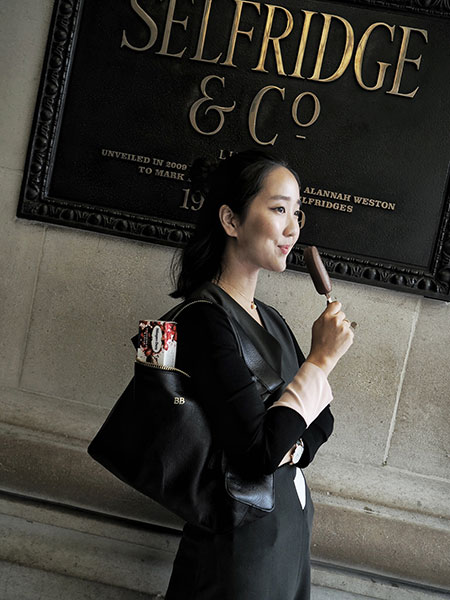 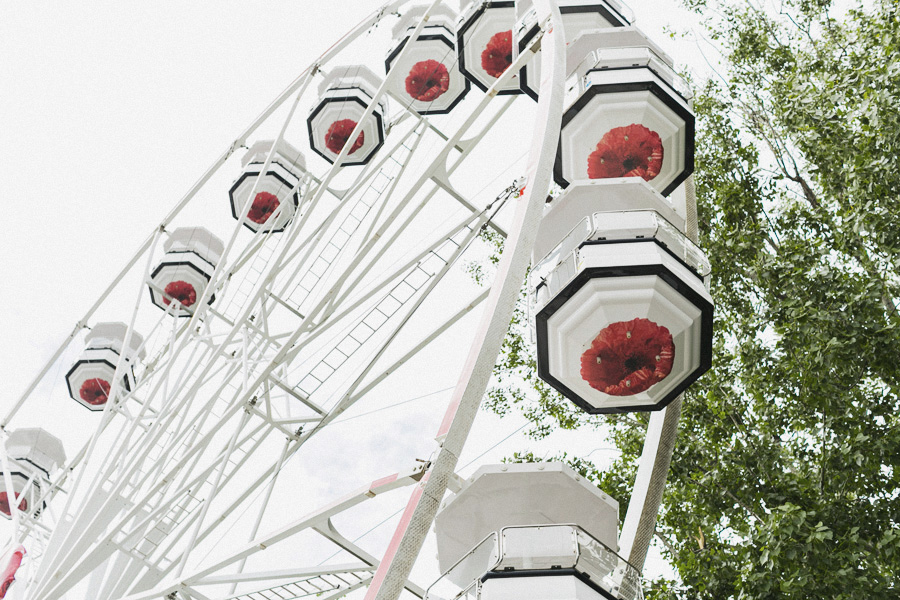 There and back again, 3 minutes in Paris with Kenzo Parfum

Beautiful Aimee of Song of Style 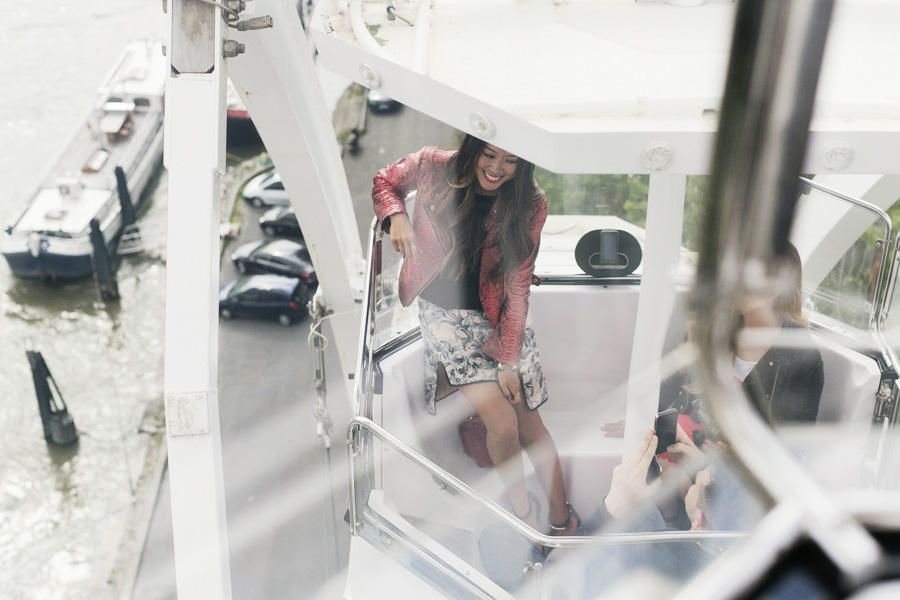 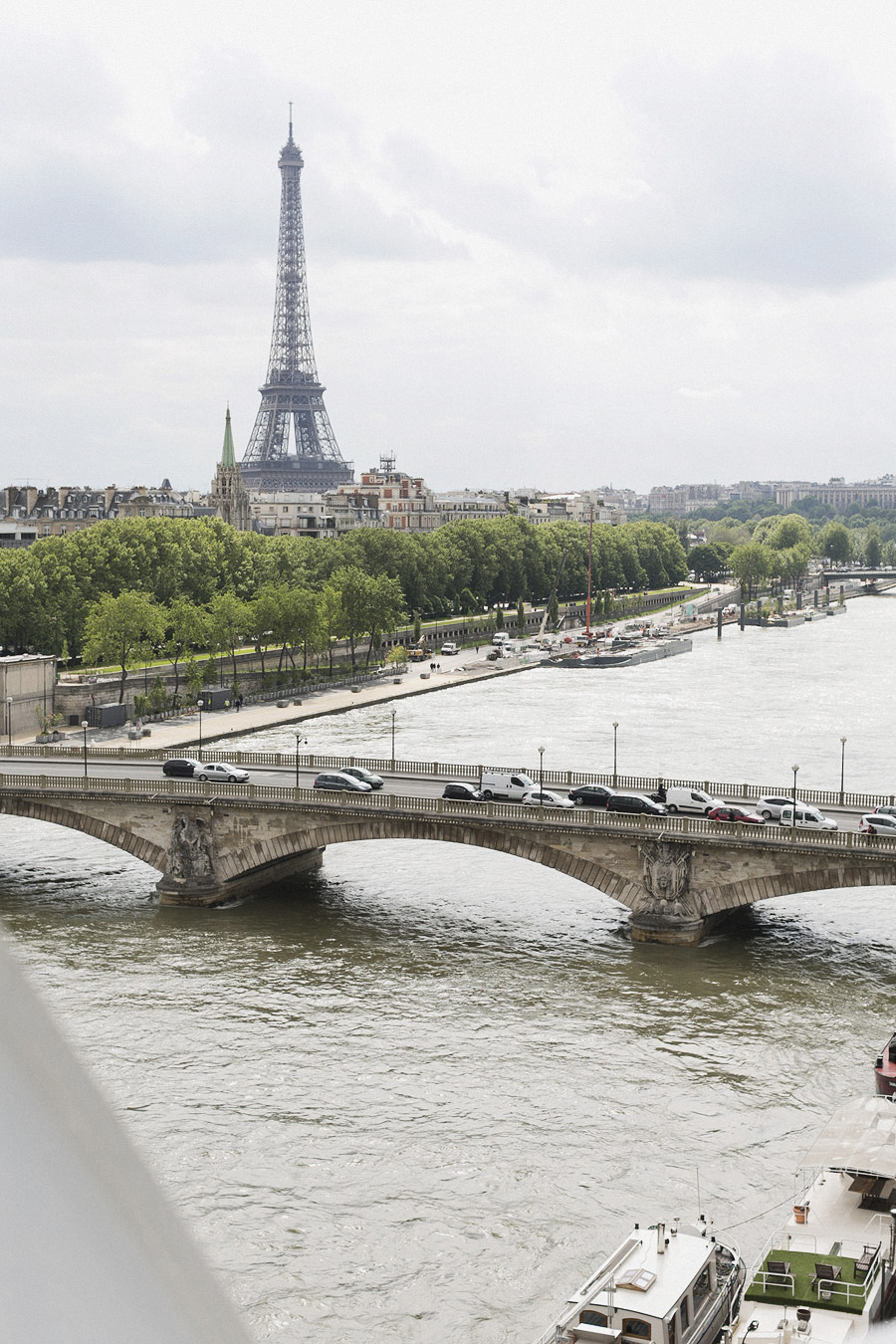 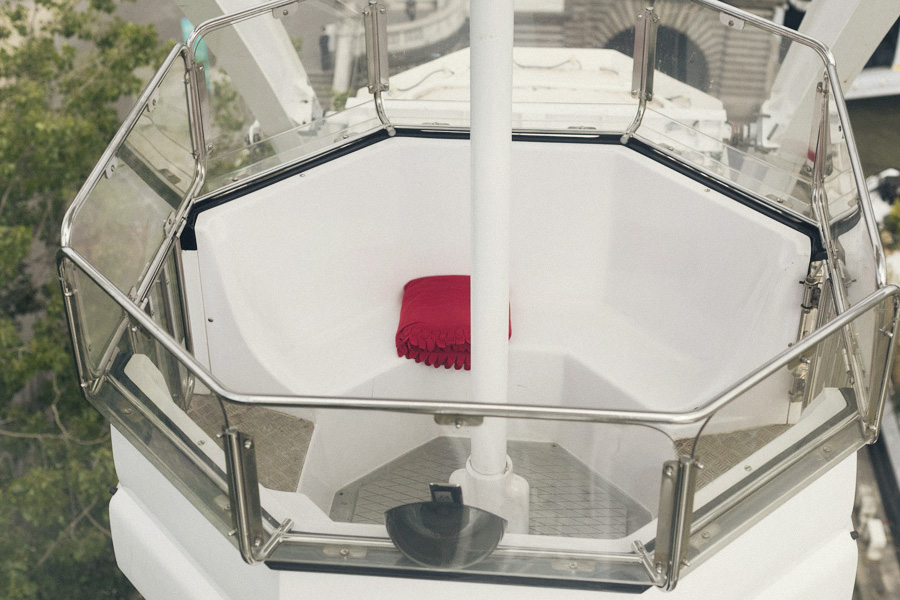 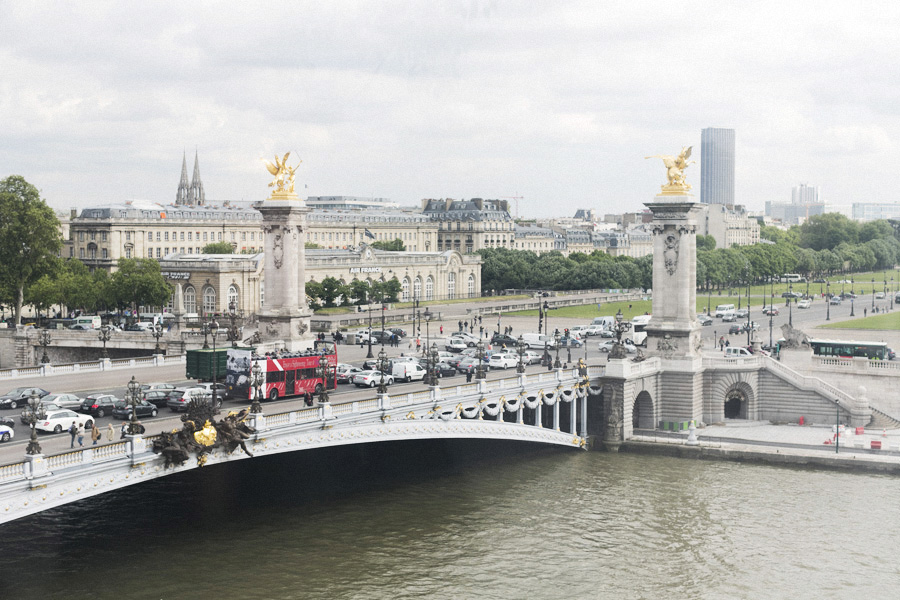 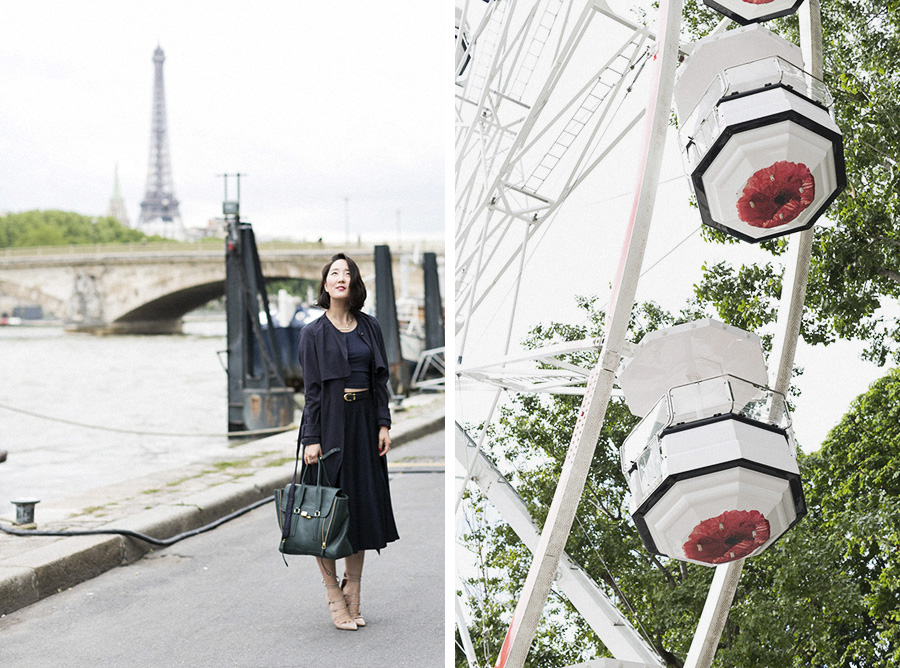 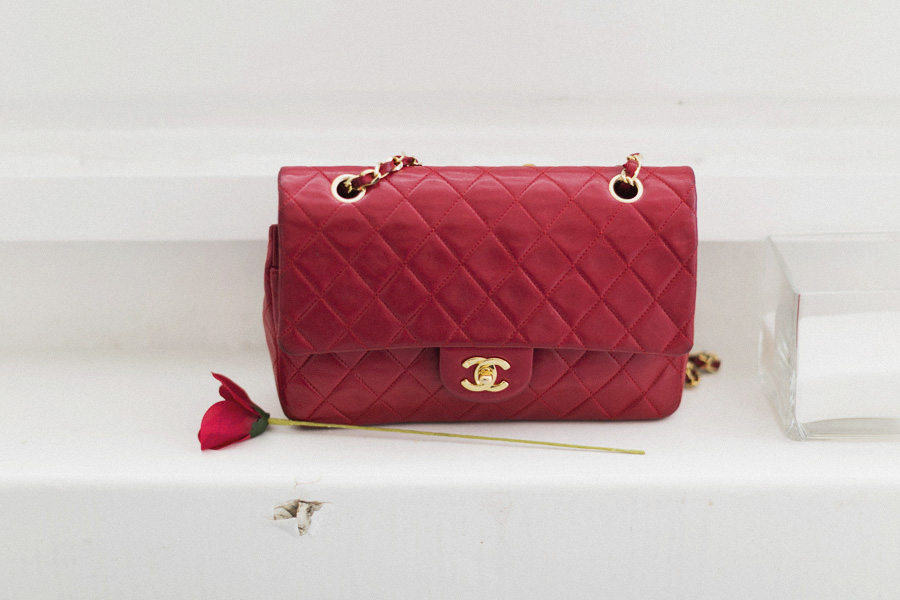 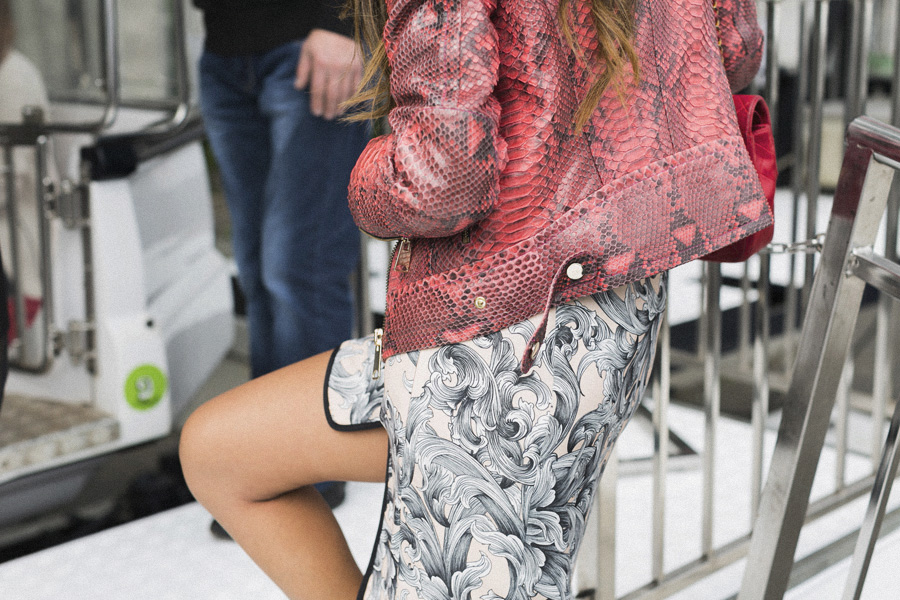 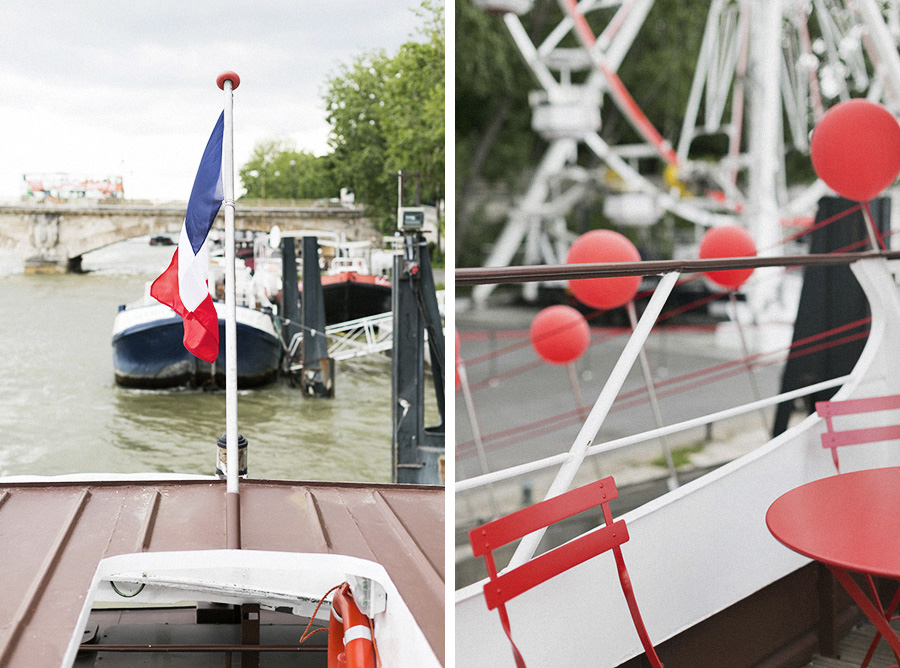 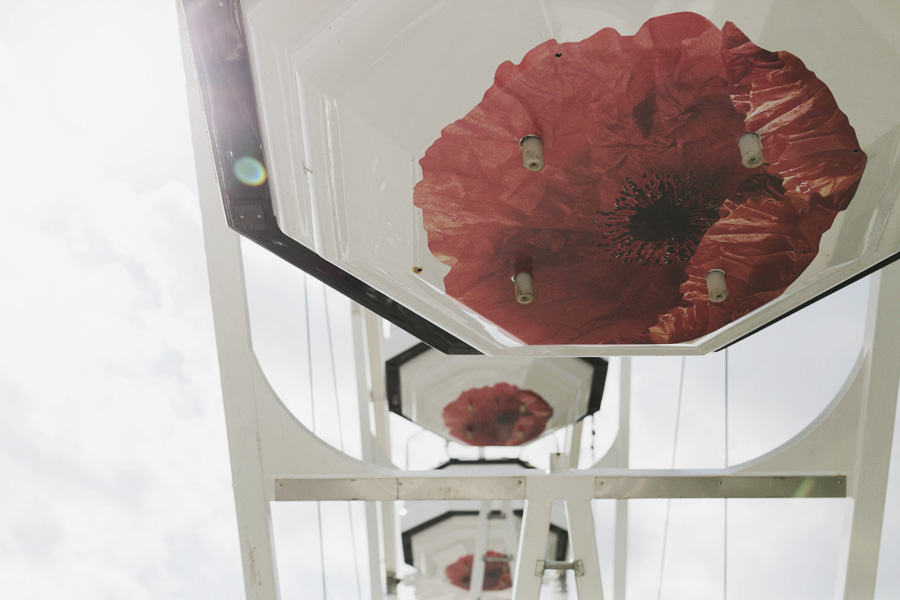 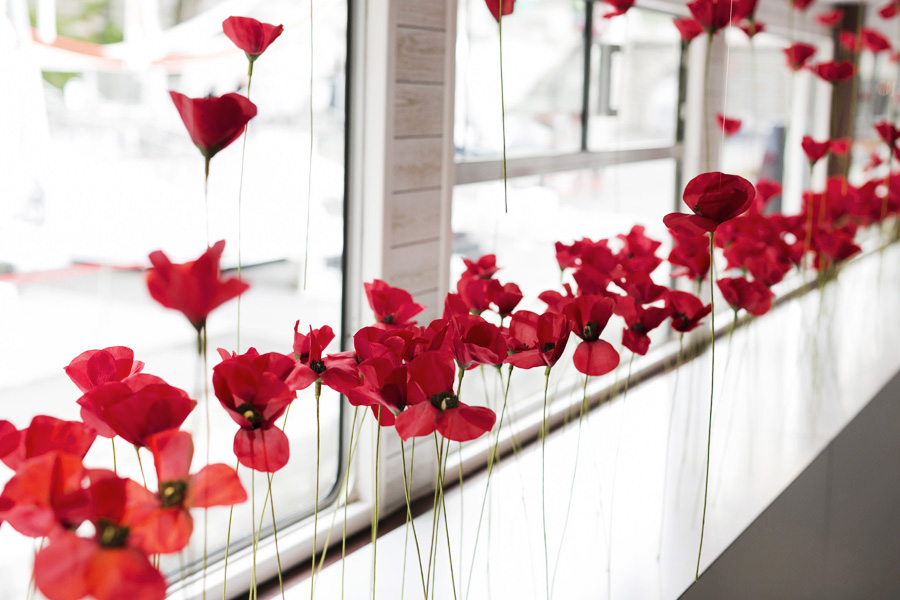 When I was younger my daddy used to go on these business trips where he’d leave at the crack of dawn and be back for dinner the same day. I never understood it – in my mind a trip that involves trains or planes meant packing puzzles, books and Barbie outfits (we never remembered to take the actual Barbies) and my brother and I would take a nap in the car to the airport and find ourselves in a hotel bed the next morning. Then we’d spend countless days trudging along in mum’s shadow chasing supposedly important, but always broken, buildings, and never actually touched any of the toys we’d packed. Only on my train back from Paris the other week it clicked, how it all worked, how my dad did all that within a day. I’d gotten on a midday train, arrived at 3pm in Paris, and by 6pm I was back in London in time for dinner with the hubby. See, there was  a big ferris wheel with a red Kenzo poppy stuck on the butts of each capsule, and we rode in it, three times. Then after a quick coffee and a nibble of something coconutty inside a little boat decorated with floating poppies, I was back in the cab headed to the train station. (And all that time I played with my Barbie once maybe.) That was it, I’ve cracked it, my daddy’s secret on coming home the same day he left = ferris wheel rides and something coconutty.

Kenzo Parfums are launching something cool in September, and this was a little sneakpeek, but also an ongoing celebration of the Kenzo Flower Wave movement with Every Mother Counts on improving health in pregnancy for every mother around the world. It’s a great cause, and so easy to get involved, pass on the poppy love!

Style
Why did the zebra cross the road 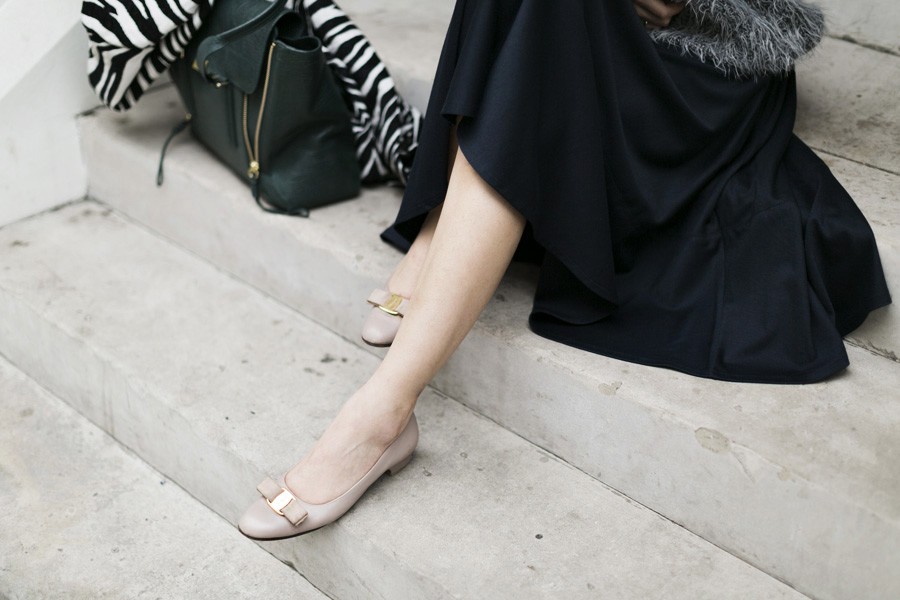 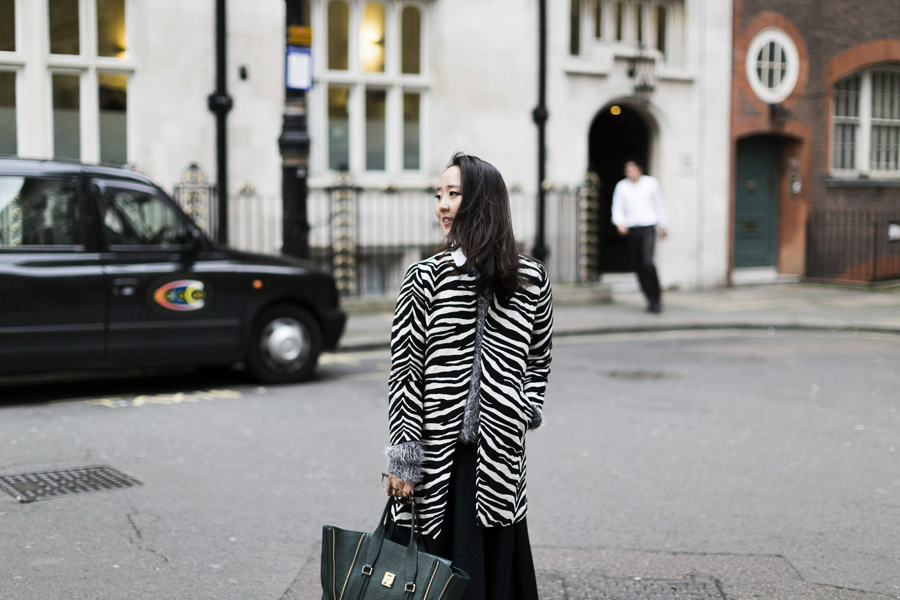 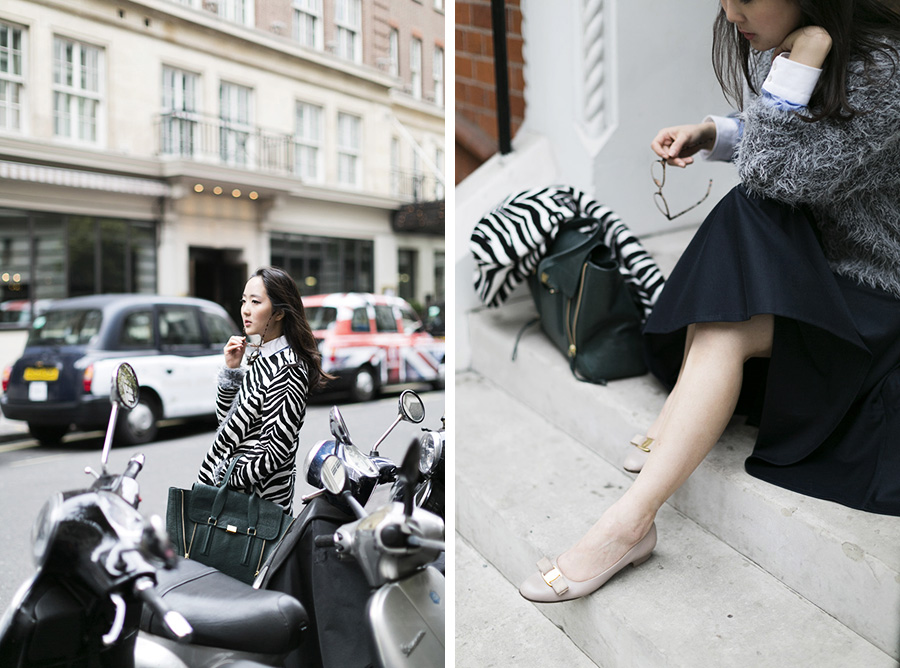 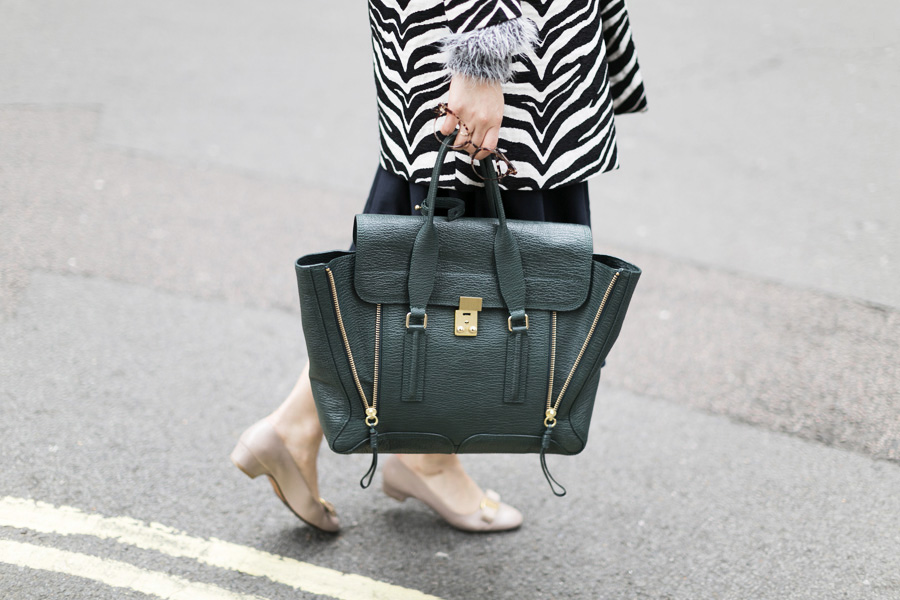 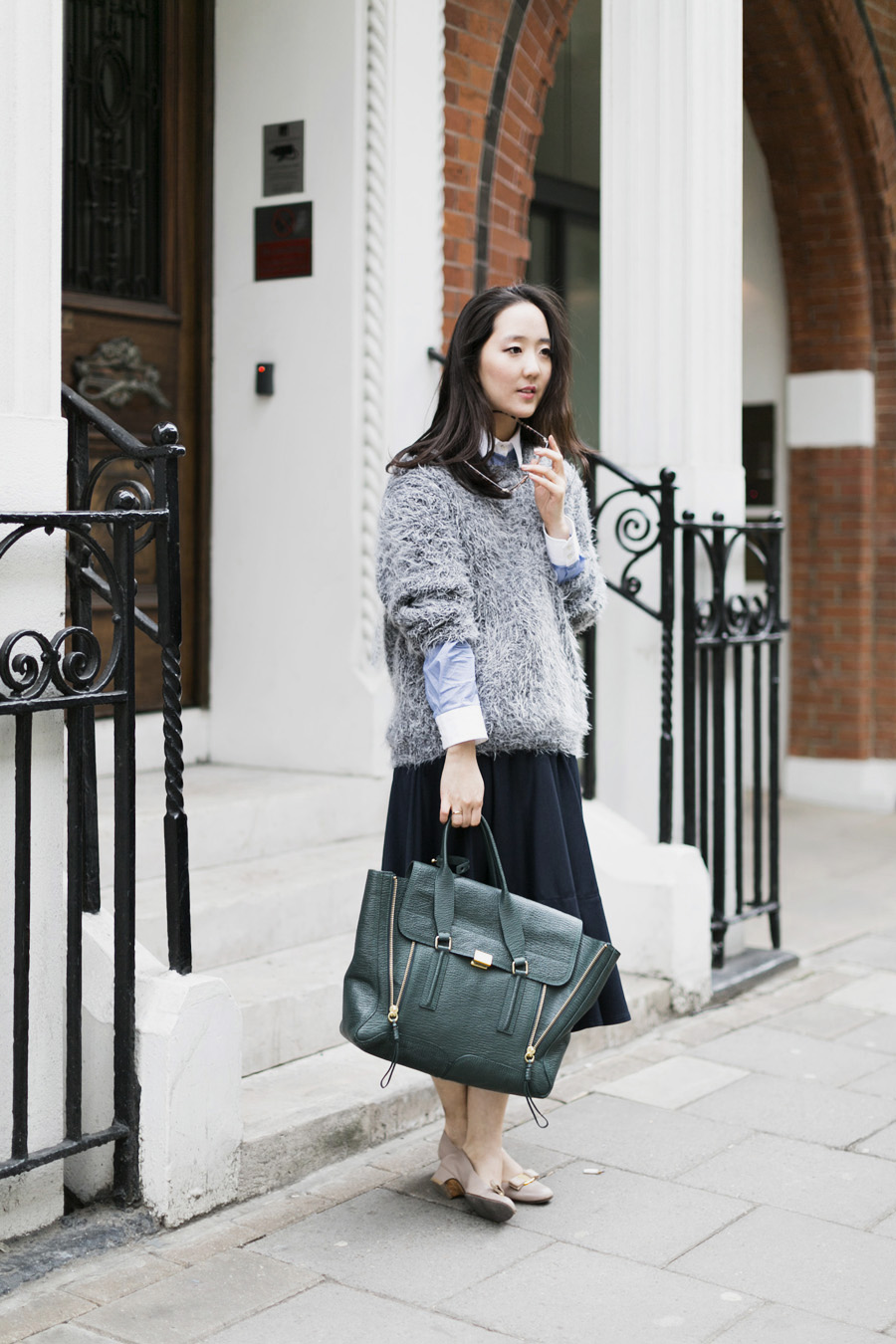 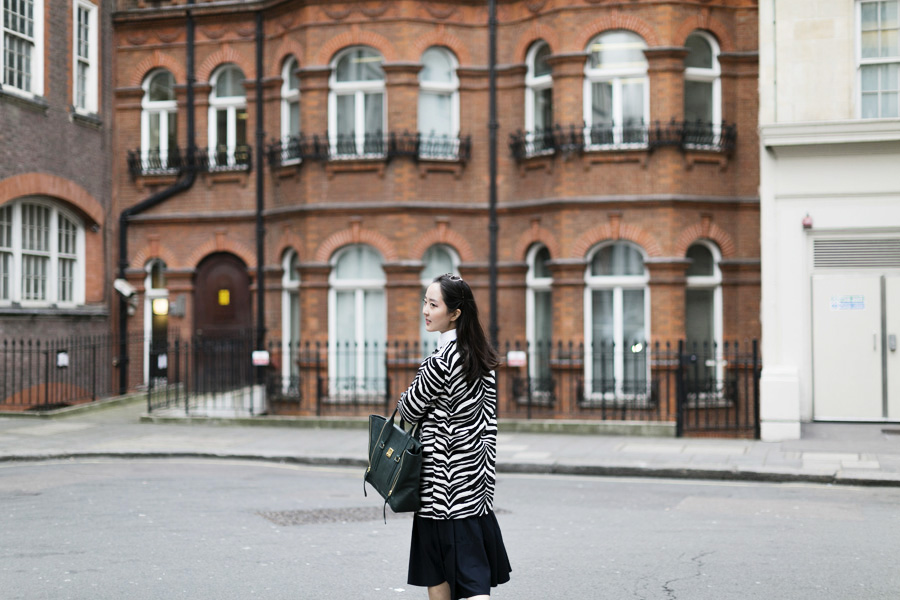 Apart from falling asleep everywhere and routinely waking up in zone 5 thanks to some heavy-duty anti-histamines I’ve been taking lately, not much else is up. I tell ya, those hotdang things apparently knock out a grown man within 15 minutes and yet I find myself fondling my phone at 4am with crusty eyes, scrolling the Instagram feed like all life mattered and eventually falling back asleep after the fiftieth cherry blossom pic. But during the day it’d kick in when I’m a least bit idle and then my eyelids get as heavy than the damn Pashli bag and I’m desperately asking twitter whether there’s anywhere to nap in the West end. (Quo Vadis on Dean Street, thank you Sophie.) I know I eat a pint of Ben & Jerry’s Chunky Monkey every other day and I guess in essence that makes me chunkier than a ‘grown man’ but COME ON I CAN’T BE FALLING ASLEEP WHILE QUEUING FOR THE ATM.

Nearly seven years and I still feel like I’m not part of this relationship. This ongoing, abusive at times, although occasionally enthralling relationship with London. I guess the one good thing about it is that it’s an open one so I can make out with Paris, NY, Warsaw without the fear entering into a nasty divorce where I lose half my assets (nectar points at Sainsbury’s mostly), although perhaps there lies the problem…? I’ve been punched around by inefficient performance in banking, transport and OH MY GOODNESS the weather, but sometimes it reveals such hidden beauty I fall right back head-over-heels in love. Like when it does this, or the Notting Hill area par example, which I’d completely forgotten about living in the other side of town. It’s like swapping sleeping sides and suddenly realizing he/she’s pretty sexy from this side of the bed. Of course, the weather thing still makes London essentially an asshole because believe it or not, these photos were taken back in November 2012 when Winter was just arriving and guess what, I just stuck my hand out the window and it’s exactly the same temperature. IT’S NEARLY APRIL, AND STOP LEAVING YOUR SOCKS AROUND THE HOUSE WILL YOU.

Although clearly I’m the man in the relationship judging by how I dress.

Hello, what’s up? My dog ate my keyboard. Once again I got an overwhelmingly positive response for a post and this time I just had to take a step back and bask in that momentary bliss, shedding the occasional hot tear that would fall in the wine glass that I’d drink from while bobbing my head to Alanis Morissette. (Fact: it is actually impossible to bob head to AM) Recycle-chic, you saw it here first. Let’s get back with the program, shall we – and what better way than to let trusty old Uniqlooks to press the resume button! Over to you, dotty blouse. Wish I could fake it and pretend this was shot relatively recently but snow in London – the kind that stays white below the ankles – is so rare that we all know these looks were shot that particular day over a week ago. Not sure which day it was, but I’m pretty sure it’s the one where lots of babies will be born exactly nine months down the line because heck I’ve never seen a city that doesn’t actually clean the snow. Hands up if you live in London and own a snow shovel? Of course, yours truly is out in the streets with the hubby only getting as intimate as getting a snowball in the face. Oh the things I write in this blog to keep it PG-13… (apparently thirteen-year-olds are the key to blogging success, hey)